P ressing wine, both red and white alike, is an essential winery option that can ultimately affect yields, as well as overall wine quality and profile. Although pressing wine is a critical process, choosing the right type of press equipment does not have to be a daunting task. Choosing a press process may depend on winemaker preference and ideal quality standards for the wine, but occasionally producers are constrained by budget and size of production, or availability of machinery. Here, we’ll discuss some of the differences between types of press machinery and help create a guide to conclude which press is ultimately the best for your wine.

First, let’s take a look at the theory of pressing grapes, and why some factors will be important to note down the line. Grapes have three zones of pulp cell rupture; indicating the order in which juice is released from within certain parts of the grape. These zones are dictated by which areas most readily release juice with increasing pressure or “pressing,” on the grapes. Think of these 3 zones as a dart board with a bullseye and two outer rings. The outermost ring is referred to as the Peripheral Zone. This zone is the most difficult to release juice from and requires the hardest pressing due to the area being attached to the skin. Thus, the more juice desired to be extracted from this area requires harsher pressing and inevitably involves removing some of the skin components along with it. These skin components provide unwanted solids and phenolic compounds that we’ll touch on later. 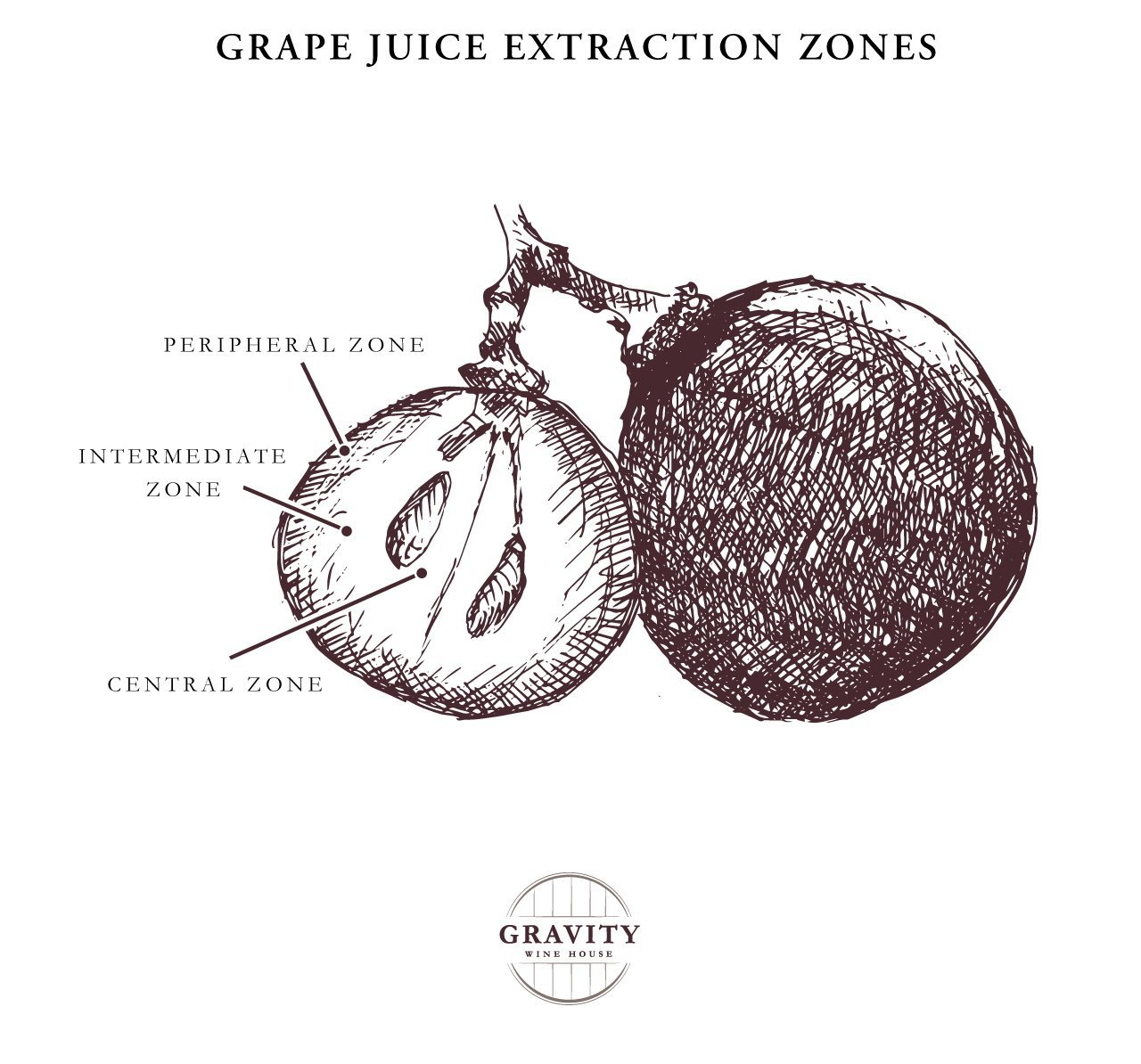 The cross section of a grape berry. This illustration show the different zones of juice within the berry, as defined by how extractable its juice is.

The “bullseye,” or the Central Zone, is the second most difficult zone to remove the juice from. The Central Zone requires slightly less pressure to release juice than from the Peripheral Zone, and it typically contributes the highest acidity. The middle ring on this imaginary dart board is referred to as the Intermediate Zone. Juice is most easily extracted from this area of the grape and contributes a moderate amount of acidity and slightly more sugar than the other zones. Most of the juice from the Intermediate Zone contributes to the “free-run” juice, or the juice that is released due to natural drainage and before pressing begins. This is typically the highest quality juice of the batch and is often aged separately from its press counterparts for premium wines. Although, occasionally these separated press fractions will be added back into the final blend. This is where the quality of press wine really becomes important. We will discuss the different types of wine presses and explore the benefits of each. 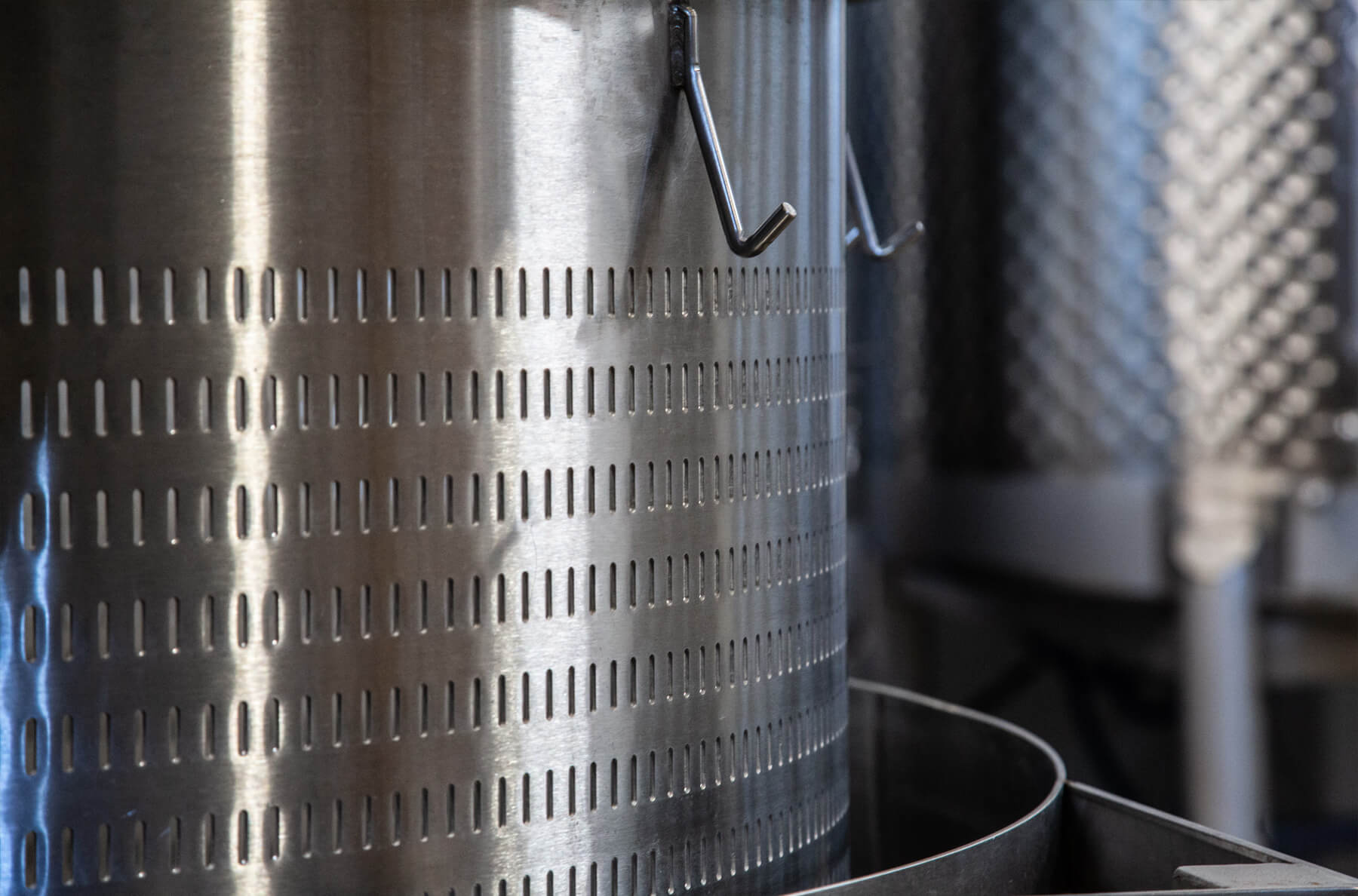 The many and clearly defining slots of a modern basket press. These slots allow for constant flow of wine while holding back any grape skins and seeds.

There are two main categories of presses: batch and continuous. Batch presses are performed by loading a single batch into the press, then performing press “cycles” which consist of different pressure steps. Increasing amounts of pressure are applied to the fruit, interrupted by breaks for the cake to crumble and redistribute. This allows for new pathways of juice to be released before the next step of pressing begins. Continuous pressing consists of (you guessed it) a continuous process where grapes are steadily loaded into the press while the juice and resulting pomace are continually expelled. While it is important to note the scope of options for wine press machinery, here we will focus on the different types of batch presses which are most relevant in our processes at Gravity Wine House. 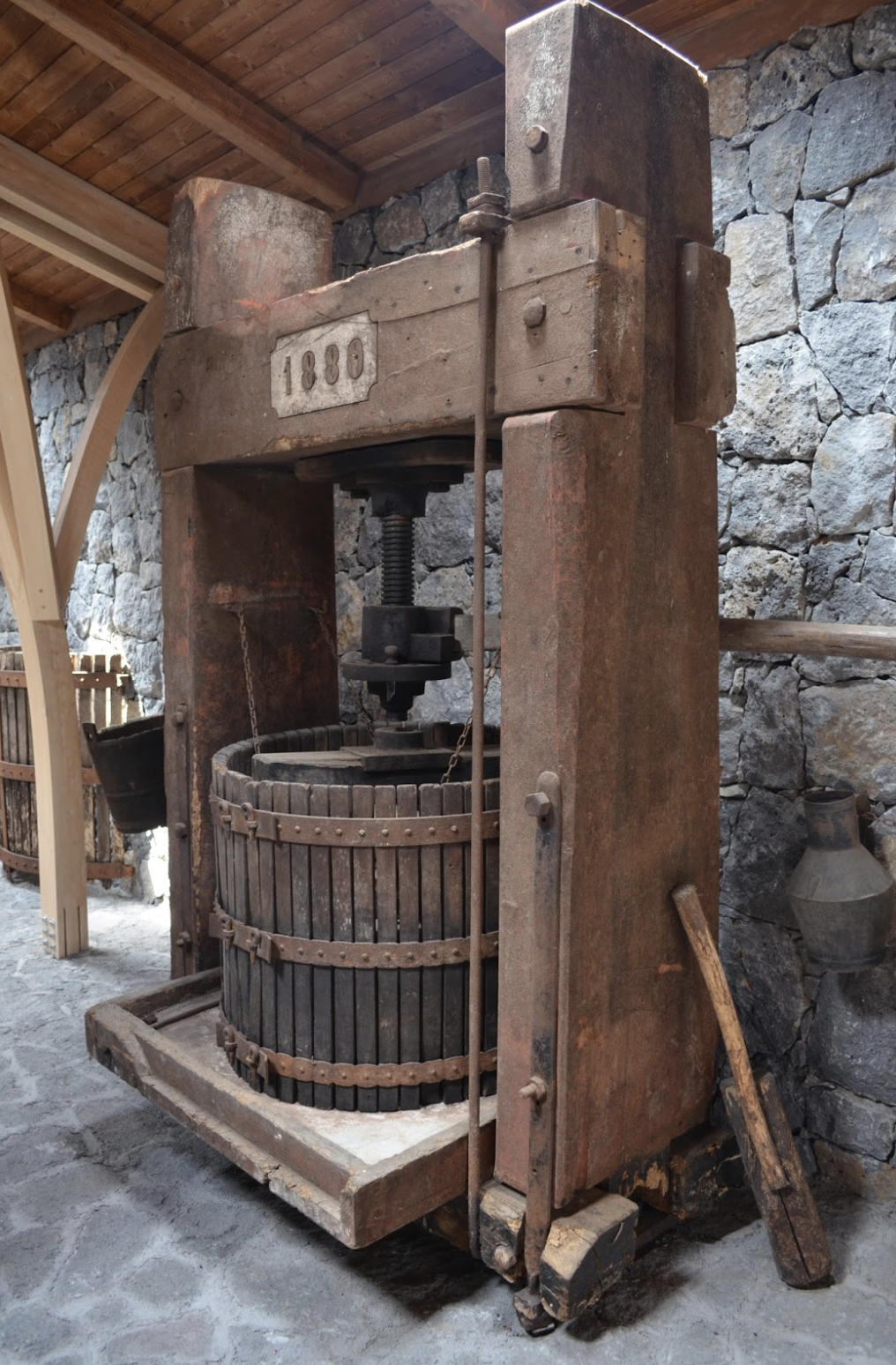 Now, modern design typically consists of a stainless steel slated cage “basket.” The basket is loaded with fruit, and then pressure is applied from above by a plate and either a screw or hydraulic rams. As pressure is applied by the plate, the grapes are pressed and compacted down, as the resulting juice escapes through slated sides and is collected. Although this process was generally thought of as more of an “old-school” method, given that it began as the most basic press design, the basket press has resurfaced within the last few decades to once again become a popular method of pressing.

There are several advantages of the modern vertical basket press, as well as a few drawbacks. The modern design composed of stainless steel (like any other press or machinery made of stainless steel) is much easier to clean and sanitize, and thus can be used for multiple purposes quickly. The press cycles can be administered manually or through an automatic program, allowing winemakers the flexibility to adjust or standardize pressure steps.

Although there has been little scientific inquiry on the matter, general perception of the basket press is that it provides more favorable press juice than other presses (mostly for reds), due to its low extraction of solids. The vertical basket press tends to perform a gentler pressing, with no tumbling of the grape cake as it gets compressed by the plates. There is less damage to the grape skins and seeds that when extracted along with the juice, it tends to impart unwanted sensory characteristics. Seed phenolics (of low molecular weight) tend to have a higher bitterness to astringency ratio than that of its skin counterparts (high molecular weight phenolics). Therefore, the more seed damage that occurs and the more seed phenolics extracted, the more bitter the wine becomes, which ultimately constructs a harsher mouthfeel. 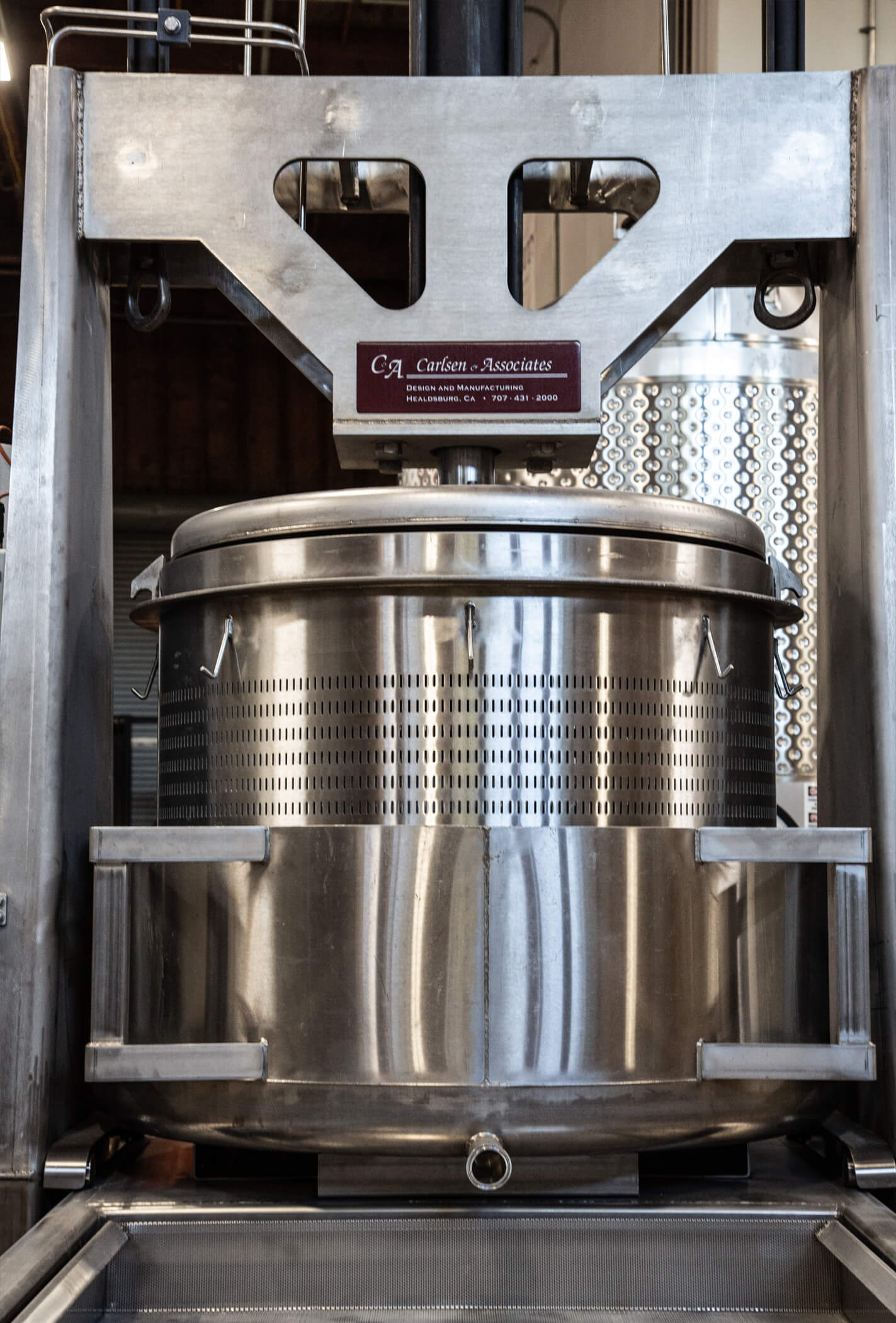 A modern and stainless steel version the basket press—this one at Gravity Wine House. Basket presses are excellent for small batches and gentle pressing of red grapes.

While gentler pressing tends to extract less solids, consequently, we’re also not able to squeeze out every drop of available juice. Yields tend to be lower when using the basket press because to avoid getting those harsh and bitter tannins from the harder pressing, less juice is released overall. This may or may not be a critical factor, given the target quality of the wine. Many high-end wineries will not include these harsh press fractions, and thus the lower yield but higher quality press juice is worth the so-called “loss.” Another limitation of the basket press is its batch capacity. Basket presses are excellent for small batches, but they would be too labor intensive and inefficient for very large volumes. Where press yield is more critical for white wine pressing, the basket press is not as ideal. In addition, the nature of the basket press design makes large berry and whole cluster pressing oftentimes more difficult, and it may be better suited for one of the other types of presses.

The pneumatic membrane press (often referred to as a bladder press) is another commonly used batch press today. Introduced in the 1950’s, its basic design principle is that a rubber bladder is placed inside an enclosed horizontal drum with drainage ducts. The fruit is loaded into the drum, and as it rotates on its axis, air pressure is applied to expand the bladder. 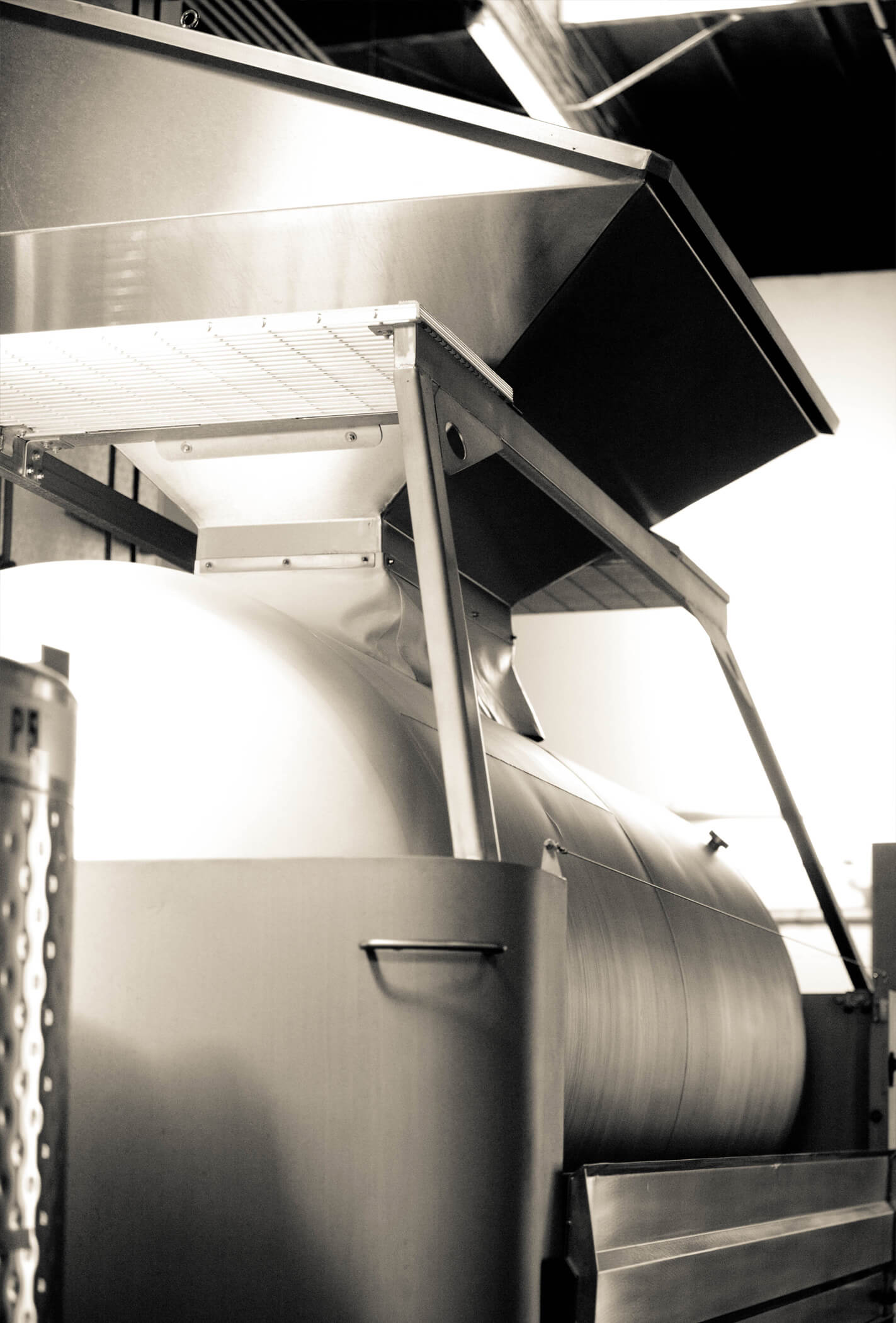 A Bladder Press at Gravity Wine House. Bladder presses excel at gently pressing small or large batches of both white and red grapes.

Ideally, this creates an evenly dispersed layer of grapes around the drum, which when the bladder is expanded, presses the grapes against the drainage ducts. The juice is then extracted and collected, while also separating from the solids and pomace that remain inside the drum.

The enclosed “tank” drum of this press design has the advantage of some added protection from unwanted oxidation. Pneumatic presses typically have a higher fill capacity than basket presses, thus making them more ideal for larger batches. This press design also allows for intermittent press rotation while filling, resulting in very efficient drainage of free-run juice before pressing even begins. In addition to higher fill capacity, the pneumatic presses tend to output higher yields than the basket press. However, the higher yields may also indicate harder pressing, more solids, and ultimately harsher press fractions. If quantity and efficiency are desired over quality, the pneumatic bladder presses are the way to go.

While less common than the vertical basket press and the pneumatic presses, it should be noted that another viable press machine is the horizontal screw press. This type of press functions similarly to a vertical basket press, although it is horizontally oriented instead of vertically. An enclosed horizontal drum is filled with fruit and then a screw assists in applying pressure to the cake by plates from both ends. As the plates apply pressure into the middle, the cake is compacted and allows drainage of the juice through the slated drum. The advantage of the horizontal screw press over the vertical basket press is that it can generally handle higher volumes. However, the screw press is often overshadowed by the pneumatic bladder presses. Although it appears they are able to produce similar quality and yields of juice, the previously outlined advantages of the pneumatic press tend to outweigh similar traits of the screw press.

Although batch pressing is preferred for higher quality wines and press fractions, sometimes efficiency is the most important factor—especially when dealing with extremely large volumes. Continuous presses have the advantage of constant production and output, all while incurring minimal labor costs. A continuous screw press consists of a screw inside of a hollow pipe (referred to as an Archimedes’ screw), which is situated in an enclosed drum. Fruit can endlessly be loaded into the machine as it continuously presses the fruit against the wall of the device to extract the juice. The screw moves along the remaining solids so that they are separated and expelled from the desired press juice. Although this design function promotes the highest efficiency, the press action here requires lots of tumbling and harsh pressing, causing a significant amount of extraction from the skins and seeds. This low-quality juice may bulk up your wine in volume, but in some traditional regions, the continuous screw press is, in fact, banned from being used to obtain juice for higher-end wines. 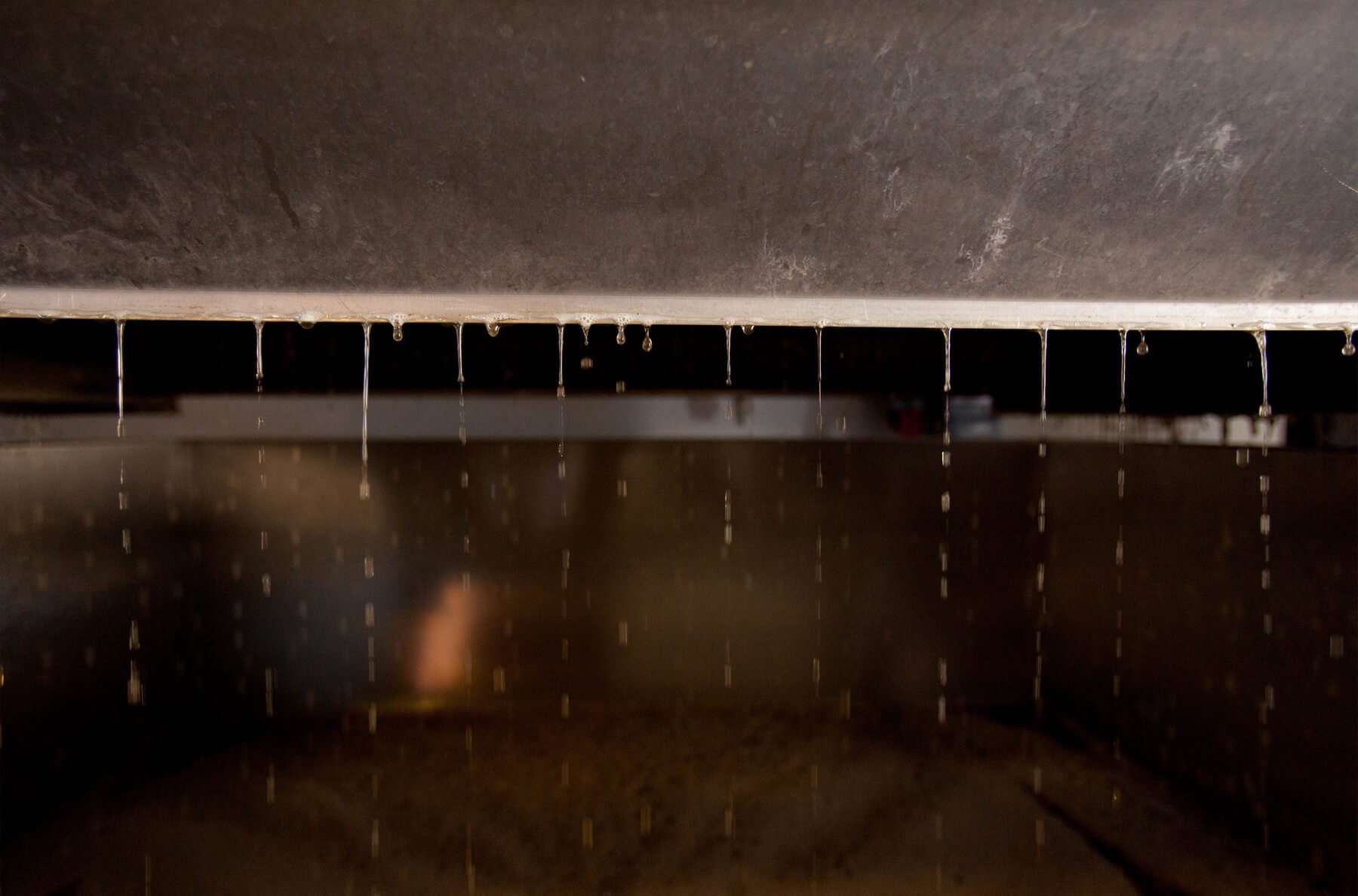 Drops of chardonnay draining from the press. A high-quality press should be able to slowly drain and allow one to monitor each pressure step during the press program.

The right type of press for your wine depends on several factors and priorities. Continuous presses allow for large processing volumes, minimal labor and maximum efficiency, but they may sacrifice on quality. On the other hand, the vertical basket press may be your best bet for small lots and when priority is high for quality press juice. Conversely, this also means lower yields and smaller production capabilities. Somewhere in the middle may fall the pneumatic membrane presses, as they can handle larger volumes than the basket press, but with possibly higher solid extraction in conjunction. Gravity Wine House currently offers and utilizes both vertical basket and pneumatic membrane options for pressing wines at our facility.

How to Start a Wine Label

Winery Sanitation: An Analysis of Peracetic acid vs. Ozone