Are Sulfites in Wine Bad for Your Health?

With the ominous contains sulfites label that accompanies most wine bottles, consumers have grown wary of sulfur in wine. Despite the recent push for natural and sulfite-free wine, these titles create havoc for winemakers who do not use these descriptors. What most don’t realize is that sulfur is a byproduct of fermentation. Thus, sulfur not only plays a role in maintaining the freshness and flavor of wine, but its presence is a natural part of the winemaking process.

The Use of Additives in Wine Throughout the Years

While natural wine has become a trendy concept, the product itself isn’t new; wine labels that tout their product as natural merely are referring to the traditional methodology of making wine from unaltered grape juice with no additives, which stands in contrast to other wines found on your local supermarket shelf. Some use many of the 62 government approved additives [CFR 24.246], such as fake oak flavor and egg whites, while others have additional water or grape juice added to increase production volume and reach target sugar and alcohol levels. These methods are common in the mass production of bulk wines and create uncertainty surrounding any additive to wine. In reality, many wines fall in the middle of the spectrum and do contain a few additives that are necessary for creating a shelf-stable product. 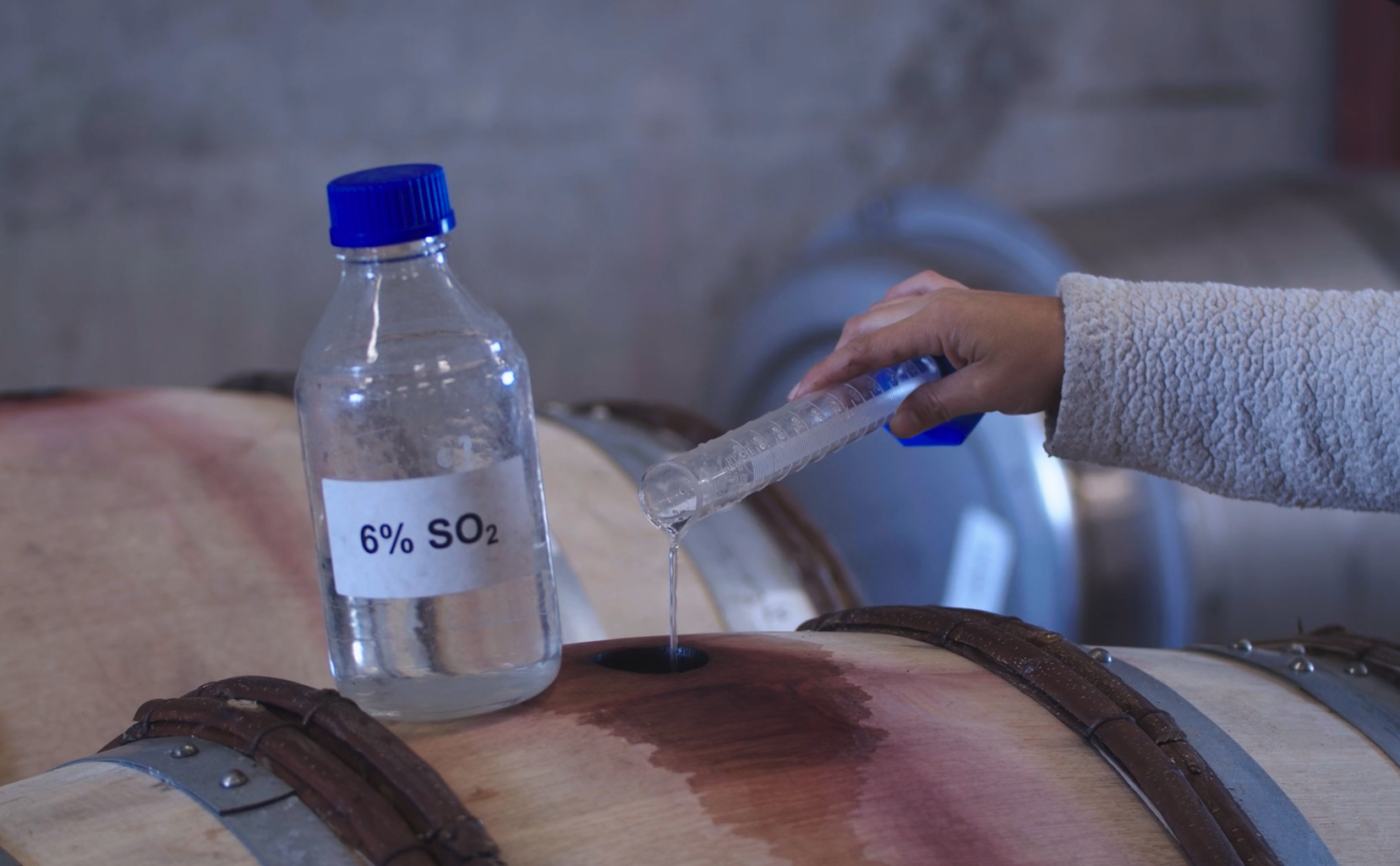 Sulfur dioxide, or SO2, is one of these approved additives that is heavily critiqued, despite its benefice to the freshness and flavor of wine. Sulfur prevents the wine from reacting with oxygen, which can cause browning and unpleasant odors, and inhibits the growth of bacteria and undesirable, wild yeast in the grape juice or wine. In fact, due to its antimicrobial properties, vintners are allowed to add small amounts of SO2 to wines that are labeled as natural. Historians believe the use of sulfur dioxide in wine dates back centuries, to the Romans who used sulfur to keep wine from spoiling into vinegar. Given its longevity in the winemaking process, you may wonder: how did sulfur become such a tenacious topic amongst wine consumers?

A Brief History of the Contains Sulfites Label

The first documented use of sulfite agents as food additives were in 1664, and approval for their use in the United States dates back to the 1800s (Lester, 1995). In 1958, the Food and Drug Administration (FDA), tasked with promoting public health through the supervision of food and drug safety, classified sulfites as generally recognized as safe (GRAS).

Beginning in the 1970s, anti-alcohol lobbyists introduced legislation to require winemakers to list all ingredients. Around the same time, a steady increase in the use of sulfites as preservatives in food and beverages was paralleled by a rise in sulfur allergies, raising general safety concerns. In response to a 1982 FDA proposal to reaffirm the GRAS status of sulfating agents, formal reports surfaced about adverse health effects in a small subset of individuals (Papazian, 1996; Sapers, 1993). In coordination with the Federation of American Societies for Experimental Biology, a report in 1985 concluded that sulfites are safe for most people, but can pose a threat to asthmatics due to acute allergic reaction. There was no evidence of sulfites as mutagenic or carcinogenic agents.

Evidently, current legislation surrounding the use and declaration of sulfiting agents is not merely based on a concern for public health and safety, but a complex interplay between government agency jurisdiction and industry lobbying power.

In response to this report, in 1986, the FDA prohibited use of sulfites on fruits and vegetables intended for raw consumption, in which sulfur was used to maintain color and crispness (FDA, 1986). In 1987, the Alcohol and Tobacco Tax and Trade Bureau (TTB), a government agency that regulates and collects taxes on alcohol, tobacco, and firearms within the United States, required any wine with ≥10 ppm (parts per million) of sulfites to declare contains sulfites on the bottle label [CFR 101.100]. The same year, when the FDA proposed a revocation of the GRAS status of sulfiting agents on fresh, minimally processed sliced or shredded potatoes for cooking (i.e. French fries), the final ruling in 1990 held null and void after a protracted court battle with potato industry lobbyists (FDA, 1987; Papazian, 1996). To this day, the French fries at your favorite fast-food restaurant, with sulfur levels around 1900 ppm, can be cooked and served to consumers without declaration. Yet, wines with nearly one-twentieth the amount of sulfiting agent must declare the additive. Evidently, current legislation surrounding the use and declaration of sulfiting agents is not merely based on a concern for public health and safety, but a complex interplay between government agency jurisdiction and industry lobbying power.

How do sulfur levels in wine compare to those in other products?

On the other hand, let’s assume that your favorite brand of dried fruit contains 2,000 ppm of sulfur dioxide (the maximum allowance of sulfur dioxide in dried apricots in Europe; European Parliament, 1995). As you sit and snack on a handful of apricots, you are consuming far more sulfur than you likely do from wine drank in one sitting. The recommended serving size (a mere 5-6 dried apricots) packs in 60 milligrams of sulfur dioxide. 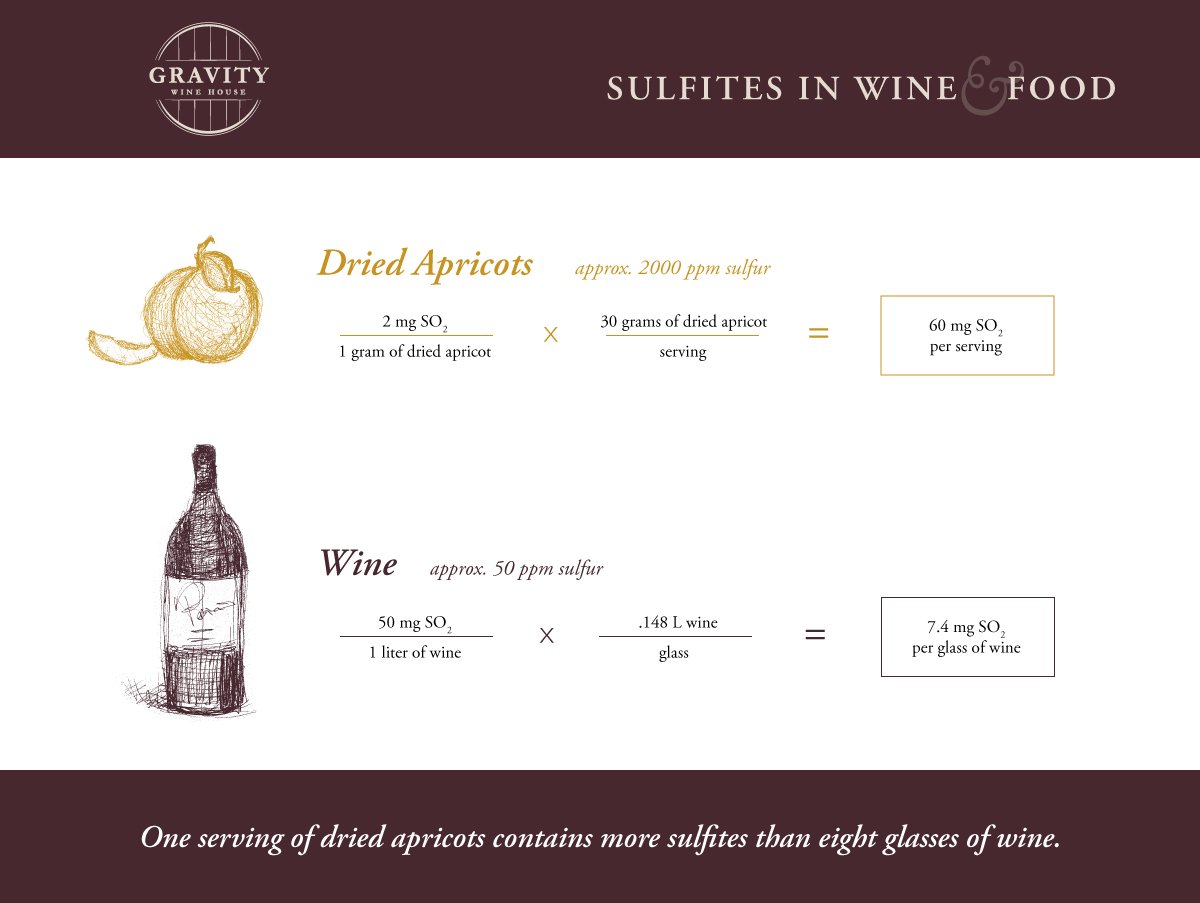 By these numbers, it is clear to see that even two standard glasses of wine contain less sulfur than one dried apricot, which means your afternoon snack likely packs multifold levels of sulfur dioxide than your evening glass of wine!

The next time you want to blame your headache on sulfites after a few glasses of wine – think again! Not only does your wine likely contain less sulfur than other foods in your pantry, but symptomatic responses to sulfur for those with a sulfite allergy seldom include headaches, and often manifest as respiratory symptoms (Cleveland Clinic, 2020).

If you’re curious to learn more about the role of sulfur dioxide in wine freshness and flavor, as well as how to measure and maintain optimal SO2 levels in wine, join Emily and Caroline for a trip to the Gravity Analytical Laboratories.

European Parliament and Council Directive No 95/2/EC of 20 February 1995 on food additives other than colours and sweeteners. (1995). Official Journal of the European Communities. Retrieved from https://op.europa.eu/en/publication-detail/-/publication/382cf3f9-631a-4f32-8317-defd0bcf7331

The Role of Sulfur in Winemaking

The “mean greenies”:
Methoxypyrazines in wine